***MP3's of RISE OF THE PHOENIX also available at boonesoverstock.com

HM MAGAZINE - Reviewer Jonathan Swank
"From a purely artistic standpoint the band nailed it. This album makes an impactful statement regarding the power of God’s grace to cut through the darkest of the darkest darkness of the heart of man and it does so with the sharpest of sharpest metal blades! Bravo!"

Tired of cookie-cutter, copycat metal albums?  The 2021 album by Biogenesis is everything you could ask or want from a hybrid metal masterpiece.  Progressive metal?  Check.  Thrash metal?  Check.  Dark, ominous, haunting, aggressive?  Check. Tiago is a legit maestro with an axe in his hands and is guaranteed to induce legendary, instantaneous drooling straight from your mouth to the floor (we can offer a drool towel for your convenience :-).  Chaz is an A+ vocalist who transitions from aggressive thrash vocals to perfect prog metal vocals at the drop of a hat.  Just as you have come to expect with Tiago's work with Perpetual Paranoia (all thee of their albums are must-have metal), Rise of the Phoenix is a whirlwind of creativity and jaw-dropping progressions.  The album is as dominating as they come.  For those who like their music definitively HEAVY....this is your 2021 album of the year. Yes, it's THAT brilliant.  12-page booklet with lyrics, and every CD comes with a foil-stamped band trading card. For fans of Iced Earth, Perpetual Paranoia, Slayer, Believer, Fear Factory, Nevermore, Jacob's Dream, and Mortification.

BioGenesis may mean “life from life” but with their new release – available now on Retroactive Records – “life from death” better describes this conceptual, molten metal journey. However, with Rise of the Phoenix, the process of “transformation” applies equally to the descriptive – new band, new label, new sound, new style. While the change from Roxx to Retroactive is the least significant of these “transformations,” it does come with the benefit of the Silver Trading Card Series #41 (featuring Chaz Bond) included with the CD. More significantly, the Nealeighs (all 3 of them) have been replaced by Tiago James Souza (guitars) and Randy Walton (bass), and drummer Eli Clossen has been replaced by Tiago Vitek.

Consequently, and perhaps surprisingly to some, the sound has morphed into an aggressive aggro-metal fusion of progressive, thrash and experimental metal. And while the conceptual nature of the lyrical content here appeals to the progressive roots and leanings of BioGenesis, the musical style here doesn’t resemble much from the band’s last two releases (A Decadence Divine and the Black Widow EP) which were more symphonic, cinematic and melodic.

Never content to tread in one musical sea for more than a season, band leader Chaz Bond, with the help of Tiago Souza, has pushed the envelope of metal to the edge of aggression and intensity with these 10 “chapters.” While this remains a collection of songs, played as a whole, Rise of the Phoenix can best be described as an extremely intense aural experience.

Based on the real-life events surrounding the infamous Jim Jones and his People’s Temple cult, the subject matter is dark, depressing and sobering. The imagery conveyed through the words and lyrics here tell a story of deep-seated Satanic deception and control. Historically accurate, this depiction isn’t for the faint of heart. But despite the extreme depravity and hopelessness portrayed through this music, the hope and faith of one man (here named Grayson Vance but based on a real life person) in Christ/God’s ability to shatter the darkness stands on display – his story one of redemption and deliverance, a journey from “ashes to glory” and from “death to life.”

To say that the intensity of the music matches the intensity of the subject matter is an understatement. Not only is the music an assault on your ears, but it may just leave you weeping (and rejoicing) by the end of the album. Furthermore, I will go as far as to say it may be a challenge for some listeners to make it through the entire 53 minutes without interruption (or at least without turning the volume down). Hence, check your volume settings BEFORE embarking on the journey or your local PD may show up at the door during your “listening session.”

Interestingly, even though Rise of the Phoenix is a departure from the last few albums, the “wall of sound” approach deployed here brings to mind another band that begins with the name “Bio” – the U.K.’s Biomechanical. From 2003 to 2007 they released a trio of albums in this style (Empires of the Worlds probably the most well-known) with relentless, pummeling guitars, drums and the abrasive vocals of John K. Funny thing, two of those albums were released on Earache Records – a most appropriate label for that style of metal. Nevertheless, I don’t bring this up to disparage Rise of the Phoenix in any way but rather to put this new release in context of metal experimentation.

However, where Biomechanical was similarly relentless and intense musically, Chaz Bond’s vocal performance here outshines John K by miles. No doubt, fans of melodic metal will not approve, but Bond’s singing/screaming is simultaneously angry/harsh and discernable/charismatic/symphonic. The brutal onslaught of storytelling (high density of lyrics here) is by far the most entrancing element to these songs – the anchor which holds it all together and the beacon which keeps the listener’s mind and ear focused on the message amidst the cacophony of metallic guitar fire and blisteringly fast drum thrashing.

Furthermore, Bond’s portrayal of Jones is so convincingly controlling and demonic, yet he displays equal interpretation and passion with Vance’s suffering and ultimate deliverance. Brilliant and perhaps his most convicting vocal performance to date. Again, don’t expect melodic bliss – the subject matter this time around demanding a more abrasive approach – but the expression and outpouring of passion is second to none.

“The Dwelling” sets the stage for the story with the keyboard-lead instrumental over top of ethereal voices and narration. 1978 … Guyana … paradise…

“The Covenant” opens the shred in grand fashion and establishes the different nature of this metal album. The keyboards are mostly gone, the vocals are harshly intense and the guitars and drums relentlessly crushing and fast.

“By Design” is a relentless frenzy of guitar and drums devoid of melody propelled by the scheming screams of Jones. Even the guitar solo gets seemingly buried in the crushing mechanical chaos (by design). If the purpose of these first two full-length songs is to establish the smothering control of the cult’s leader, BioGenesis have succeeded. Oppressive aggression throat-hold of metal fury.

“Within These Walls” introduces a small dynamic to offset the fast and furious with a few breakdown sections and the more melodic singing mid-song. But the lurching schizophrenic rhythm guitar throughout is impossible to ignore. As Vance tries to reach out to Jesus, he is repeatedly drowned-out by Jones’ dominating control (the guitar). As the song moves to conclusion there is an “opening” in the music as Vance breaks through.

However, on “Breath Forgotten” Jones-guitar reasserts his control, oppressing Vance. Once again, though, as the song moves along, there is a moment of “light” lead by spirit-filled guitar solo and more melodic cries with Queensrychian passion from Vance.

With the next two tracks the story reaches its pinnacle of confrontation. The ego-centric Jones – pushed against the wall at the threat of being exposed – reveals his true nature to his followers (“Heavenly Darkness”). Musically this is one of my favorite songs because there is more dynamic drumming and colorful interplay of fast and slow passages between the drums and guitars.

Jones’ vial act culminates on “The Suicide Lie” as he leads his “children” to their death. Bond’s vocals here are spectacular – brutal, charismatic yet with that sinister, cynical Alice Cooper clarity.

“A Thousand Tears” – the aftermath. Finally, there is a moment of melodic clarity/balladic passion as Vance awakens to the aid of the paramedic who discovers him amidst the dead – with a pulse and breathing. Fans of the previous releases will enjoy this more “traditional” power anthem as it builds throughout its course. Once again, a fantastic vocal performance and the antithesis to “The Suicide Lie.”

The title track smokes – a song of victory, of redemption – every band member clicking in thrash unison. Vance’s “testimony” if you will, this song has guitar shred, melody, pace, frenetic drumming and a powerful message. Granted, the voice-overs are a bit cliché’ at beginning and end, but hey, this is heavy metal drama after all!

“Ashes to Glory” is the perfect closer because it encapsulates the story and the music of Rise of the Phoenix. The guitars are more dynamic, more progressive, but no less intense, and we even get a bit more bass and drum rhythmic play. Bond showcases the full power of his dynamic voice as he speaks through Vance –

I will confess that when I heard this for the first time I wasn’t sure what to think – this such a departure from the previous album. But with time the purpose of the layering of music, of the style became more apparent in lieu of the lyrical concept and story. If you listen to the songs in succession the listening experience is more complete, but even so, many of the songs in the latter half of the album stand well by themselves, particularly “A Thousand Tears,” the title track and “Ashes to Glory.”

One criticism will likely be that some of the songs are similar in style and execution. This is a fair observation – this not as diverse as the previous two releases – but I would argue it serves the nature of the events described, the relentless control of Jones over his followers. Without a doubt, Tiago James trademark sound and style is written all over this music and so fans of his other incarnations will widely embrace Rise of the Phoenix, but fans of previous releases may look the other way.

In summary, Rise of the Phoenix is an intense emotional and spiritual journey with a soundtrack crafted from the extreme metal realms. Chaz Bond is fantastic here, but his vocals alone might not be enough to draw the listener back for repeated listening, partly due to the intense lyrical nature and partly due to the relentless aural assault. From a purely artistic standpoint the band nailed it. This album makes an impactful statement regarding the power of God’s grace to cut through the darkest of the darkest darkness of the heart of man and it does so with the sharpest of sharpest metal blades! Bravo! 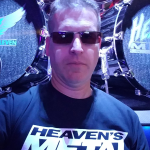